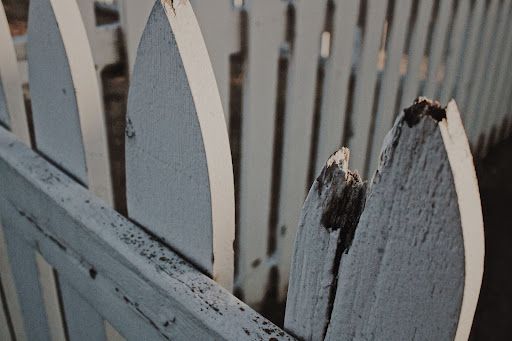 Many take the phrase “good fences make good neighbors” to mean we should build barriers between us and the outside world. We build fences for protection, privacy and to establish boundaries. But that’s not at all the phrase means. It comes from the poem Mending Wall by Robert Frost where two neighbors meet every year to rebuild the fence on the borders of their properties.

It is not the mended fence that is important, but rather the coming together of the two neighbors to meet consistently and work together for a common purpose. It is the act of mending relations, not building fences, that matters.

It stands to reason then that the person with the most friends and neighbors has the opportunity and responsibility to maintain lots of relationships. Last time we left off after finding out which member of our example university Karate Club has the most friends in common with the member represented as Node 3, but before we jump in, lets recap the Rel code we’ve written so far:

Now, what we would like to see is the node ID and the count of common neighbors together. We can output both this way:

That's great, but having to repeat count_of_common_neighbors[3] feels wrong. How about relationship arguments? Why do I have to repeat myself? Why do I have to tell you multiple times? Why didn’t you listen to me the first time I told you? You never help out around the house. I am tired of your promises; you never change. Just who are you texting at 1am?  This is all your fault. My mother was right about you! I hate you, I want a divorce. 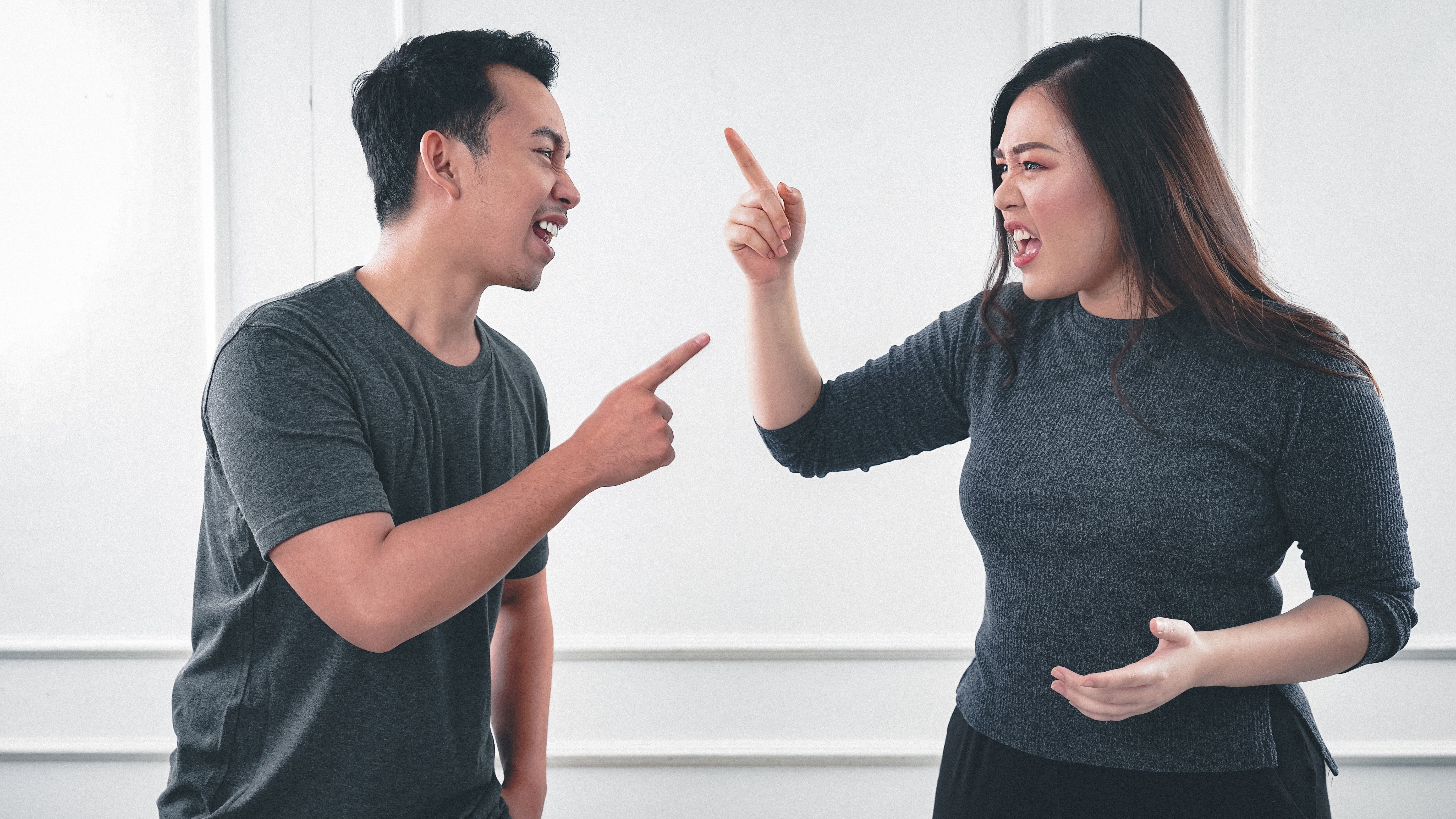 Sweet! Pause here, take a breath. Wash away the flashbacks of fighting in your personal relationships. Now think about what this makes possible. Relations as arguments. We’re talking about meta programming in a query language. This is amazing.

Ok, let's try something else now. We can do two hops, but what about multiple and variable hops? Which nodes can we travel to starting from a node? We’ll use the power of recursion to define “reachable” as being related to us by an edge or having an edge to something already reachable. Let’s see which nodes we can reach from Node 3:

That doesn't look right. Oh of course! That’s because we have an undirected graph.  We need to use neighbor instead of edge to travel from both incoming and outgoing edges!

There we go, now we have the right result. But we can actually shorten our definitions. In Rel we have two shortcuts for these types of queries. One is point-free syntax which lets us omit the variables (x, y, etc.) when their omission doesn’t lead to ambiguity… in other words, if they don’t make the query any clearer.

The second is relational composition, which lets us use the dot . to join the last element of a relation with the first element of another relation so we can actually write our definitions like this:

Take another pause here to appreciate this. We can define self-referencing recursive definitions. Both reachable and reachable_undirected are just one line of code each. Recursion is incredibly easy to express in Rel. Think about all the graph queries and algorithms that can be easily expressed using recursion. It’s like being able to use the Five Point Palm Exploding Heart Technique to defeat complex graph problems.

Now, back to the output of that query… it is a long list, how about we count them?

We can reach every node in the graph as it is one big connected component, since the members were all in the same Karate Club. We should define that as well. Typically the connected component ID will be the lowest node ID in the set of connected nodes.

It is all 1s, since that is the lowest node ID of the entire graph. Here’s a visual of the Karate Club graph as one big component: 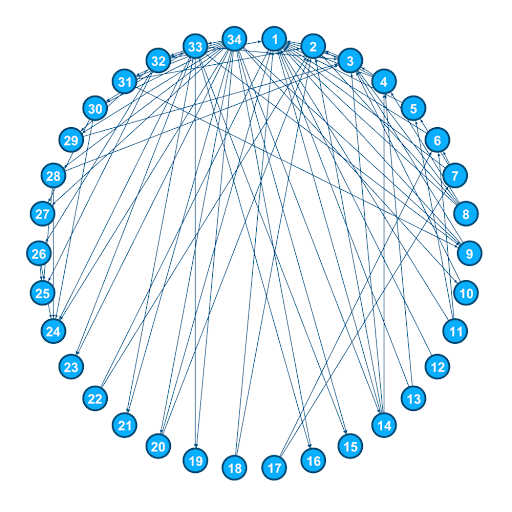 Let's add some dummy nodes and a relationship between them to help us understand how the definition of connected components works. These nodes will connect with each other but not with any of the nodes in the real Karate Club graph.

Ok, what about similarities? Just how similar were the social relationships of the members of the Karate Club? Do we have any nodes that are practically mirror images of each other? 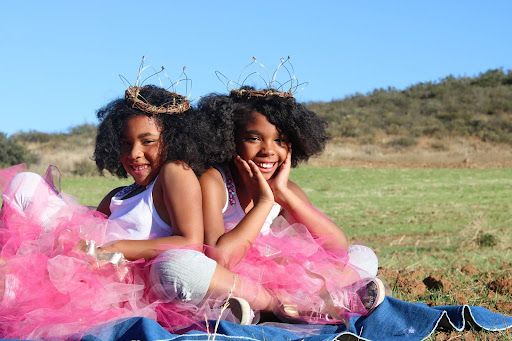 In the world of graphs, there are a bunch of similarity measures. We can start with cosine similarity, which measures the count of common neighbors divided by the square root of the product of the counts of each of the two nodes.

That’s a mouthful, and the Rel definition is almost the same as English:

This gives us the cosine similarity scores between each pair of nodes. We can also ask just for the scores of one node. Let’s try Node 3:

We can see that Node 3 is more similar to Node 4 than it is to Node 5. If we think about their common neighbors we can see that is true.

Let’s see which nodes are the most similar by sorting the similarity score in descending order. The documentation tells us we have a reverse_sort method for that.

That doesn’t look right! It is sorted by the node ids in reverse order, not the similarity score. We need to tell it to do it by the last value in the relation. As luck would have it, Rel supports variable arguments using ... which lets us define methods that take zero or more arguments.

We can also use an inline definition from another inlined definition. So instead of reverse sorting the relation as is, we will move the similarity score to the front, then we will reverse sort by it, then the first node, then the second node.

The values in the last_arg get moved back to the end. The output is the iterator (created by reverse_sort) followed by the first two values, which were captured by other_args… and then the last value in last_arg, which is our similarity score.

Now we can see Node 21 and Node 23 have a perfect cosine similarity score of 1.0. They are both related to Node 33 and Node 34 and nothing else.

We already know that the count of neighbors is just the degree of a node, so let's reuse that again. This time let’s just look at the similarity scores for Node 3:

Turns out Node 3 has the highest similarity to Node 4, then Node 34 and then both Node 31 and Node 8.

These features give you tremendous power so you can express your business logic clearly and concisely. Power that was typically reserved for procedural languages is now available in your models and queries. Rel is a pretty amazing language, and we’re not done yet.

Next time we will look at triangles and cliques and introduce more mind-blowing features of Rel. Be sure to subscribe to our newsletter to learn what they are! 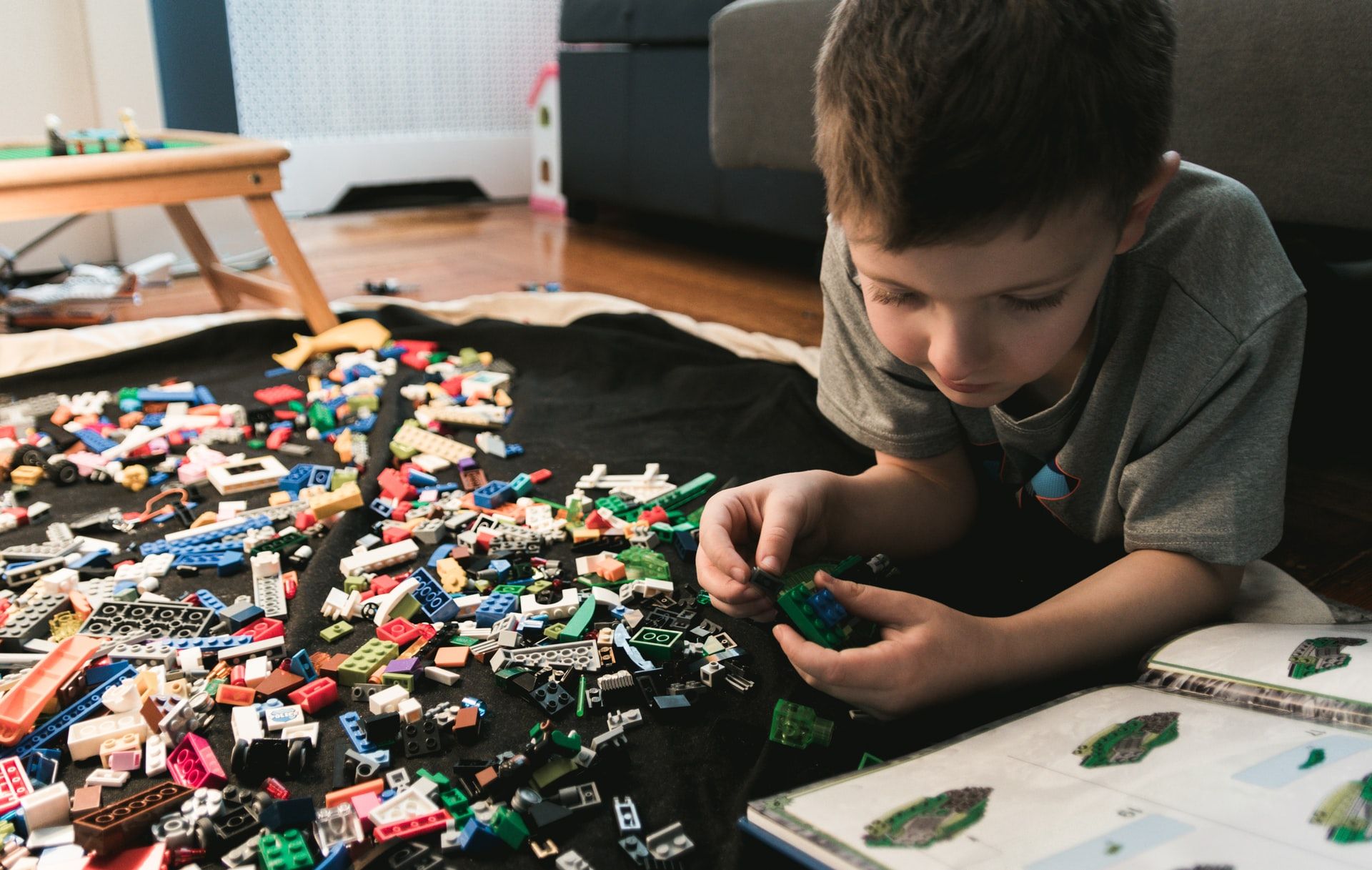 Do you remember playing with legos as a kid? This is what our query language Rel feels like. You don’t have to write 300 lines of SQL code and go absolutely insane trying to debug or handle it all in your head. You make progress with every little definition. You can divide and conquer the problem by building small pieces, combining them together and creating something that is greater than the sum of its parts. 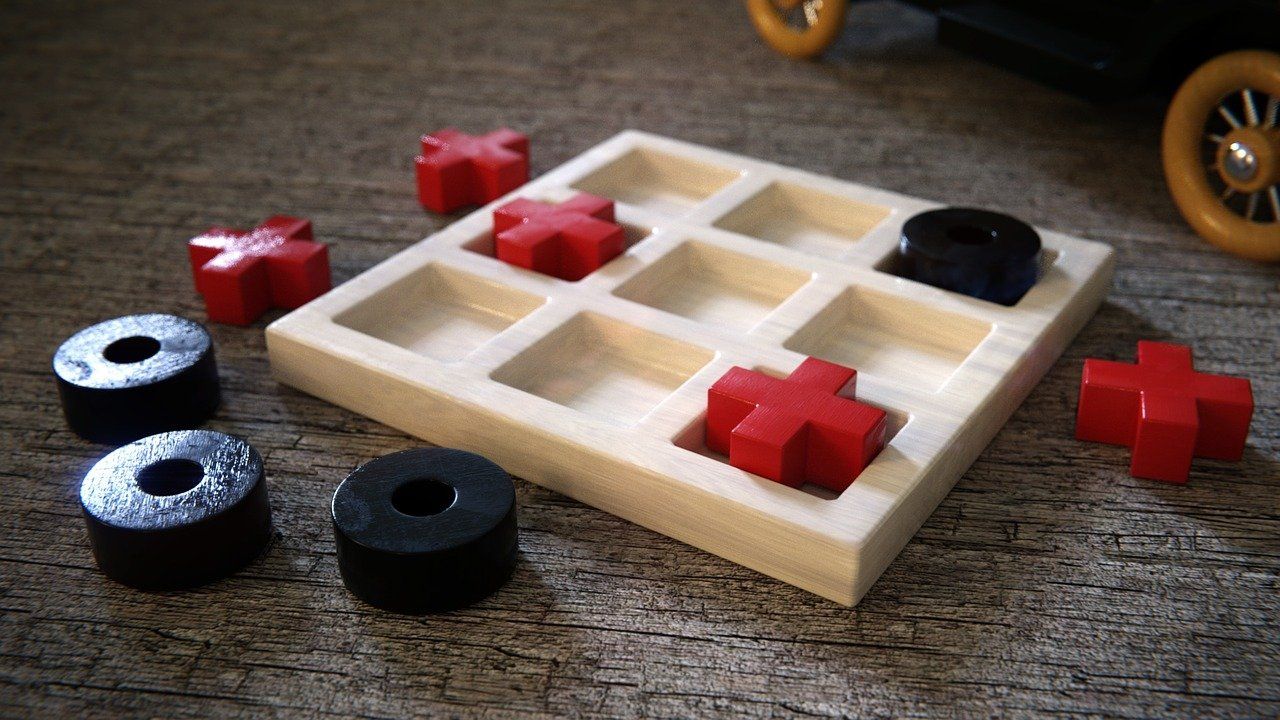 Applications implemented in imperative programming languages encode vast amounts of human knowledge at their core, but the essence of the application logic is often obscured by the imperative nature of the implementation language. 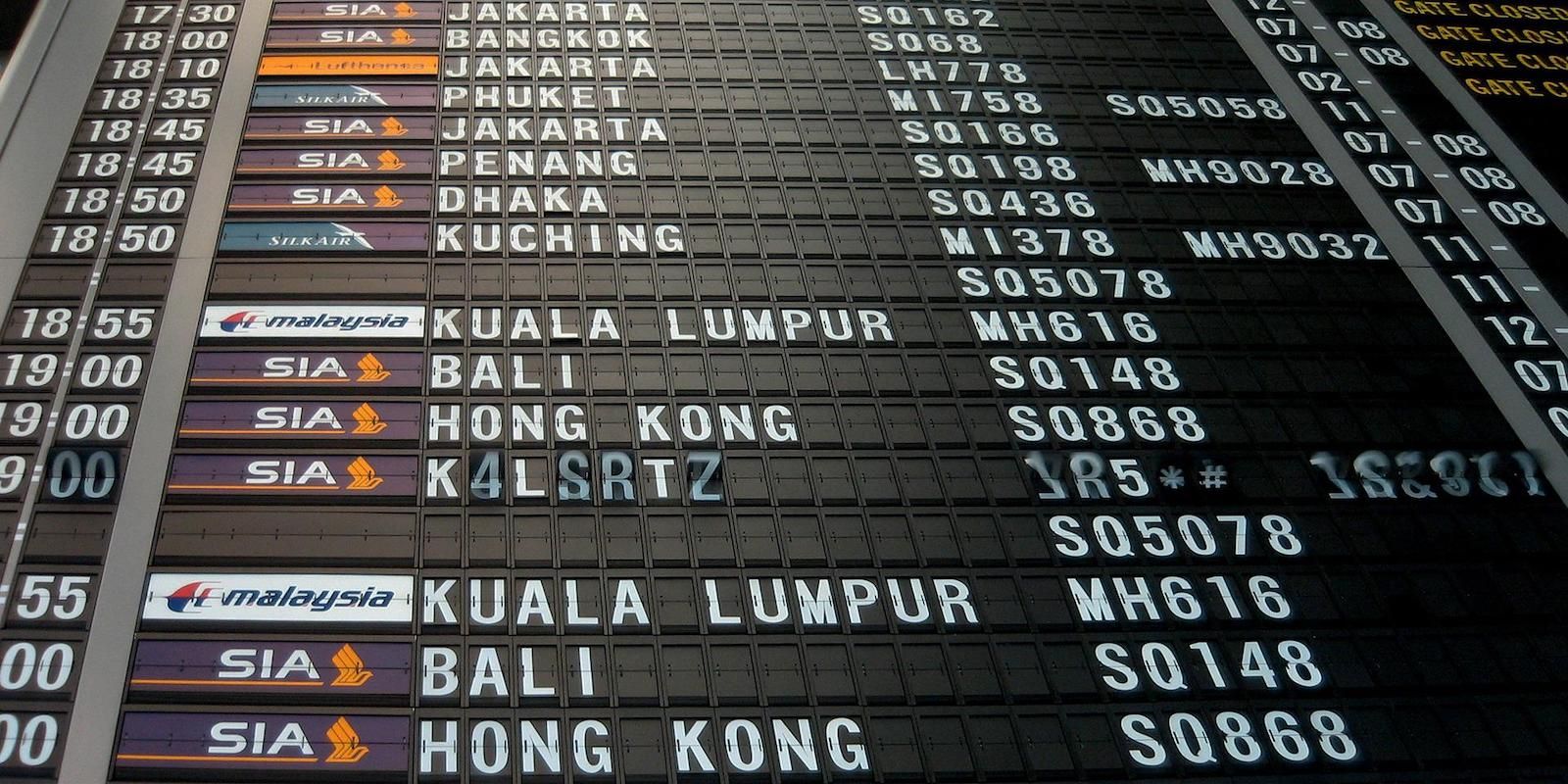